For such a small town in South Africa, the history of Port Alfred and the surrounding area is one rich beyond its size and prominence. One only has to look at its coat of arms to see the story this fascinating town has woven into its fabric.

The quarters of the shield show a fish, a rooster, an anchor and the three feathers of the Prince of Wales. Let’s take a look at the historical significance of each of these images. The fish simply represents excellent sea and river fishing. A rooster represents the 1820 Settler, William Cock, who was instrumental in changing the course of the Kowie River in the 1840’s. The Three Feathers of the Prince of Wales represent the town’s royal connection, it is named after Prince Alfred and was visited in 1925 by the Prince of Wales (later Edward V111 who abdicated in 1936). The anchor depicts safe anchorage for shipping. Atop some versions of the shield is an ancient galley commemorating early sailors who passed along these shores, notably Bartholomeu Diaz in 1488.

When the 1820 Settlers first laid eyes on the mouth of the Kowie River, it was a marshy area consisting of a few small islands and expansive reed beds. Nevertheless they immediately realized the potential of the river mouth as a port. In 1821 the Locust, a small brig, easily crossed the sand bar at the mouth of the river, sparkling development plans that lasted for almost 10 years. The Cape Government appointed J Dyason as harbour master and pilot of Port Kowie, as it then became known.

During 1825 the name was changed to Port Frances, after the wife of Colonel Henry Somerset, son of the Cape Governor at the time. In 1831 attempts by government to develop a viable port were finally scrapped. In 1841 William Cock, a local resident, formed the Kowie Harbour Improvement Company, and his efforts led to diversion of the river flow to a new channel along the West Bank. The harbour was reopened in 1863 and for the next 20 years up to 100 vessels called annually. The town was renamed Port Alfred around this period, in honour of Prince Alfred who was visiting South Africa at the time.

The advent of steam ships with a deeper draft, the developing of new harbour facilities on the Buffalo River at East London and the opening of a rail link from Grahamstown to Port Elizabeth in 1881, led to a decline in the town’s importance as a commercial harbour and it finally fell into disuse in the 1890’s. In 1989 harbour life was revitalized with the opening of the small craft harbour on the newly built residential Royal Alfred Marina, where pleasure craft of all kinds, including seagoing yachts, find safe anchorage.

The port
In 1839, William Cock and George Hodgkinson started to block the natural river mouth to the east and canalise the present opening to the sea. By 1841 South Africa’s first man-made harbour was opened after completion of the stone lined channel between the ocean and the Kowie river. This allowed high-masted sailing ships with their heavy cargo to dock at the wharf.

My note: The word wharf is an acronym which stands for “ware house at river front”. 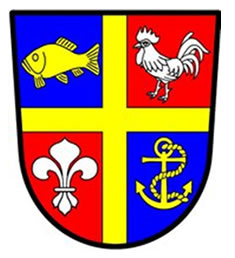